During 29-30 April 2017, the Georgian Union of Choreographers organized the already traditional International Folklore Children and Youth Festival – Rhythms of Spring – 2017.  Along with Georgian choreographic ensembles, ensembles from Israel, Latvia, Russia, Armenia and Qatar participated in the event.

Performances during the Festival were organized in two stages – at the Center of Culture of the Trade Unions of Georgia and Tbilisi Art Hall.

Along with foreign ensembles, the Festival hosted over 48 Georgian groups, number of participant dancers was over 4,000 with the audience of over 5,000.  It is noteworthy that all the concerts were completely sold out, which is the merit of the Festival organizers hard work and brilliant performances by Georgian and foreign artists.

Along with other honorable guests, the conclusive concert of the Festival was attended by the President of the Chamber of Culture of Georgia David Okitashvili and representatives of the Embassy of Bulgaria in Georgia.

At the end of the gala concert the awarding ceremony was held – participant ensembles received special certificates and prizes with medals.  As decided by the Management of the Georgian Union of Choreographers Mr. David Okitashvili was awarded the Georgian Choreography Knight Order for great contribution to the development of Georgian choreographic culture. 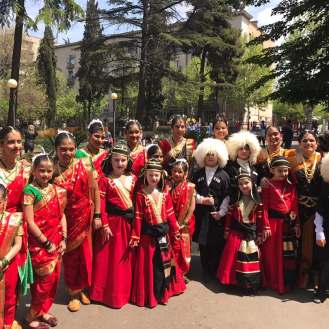 Article courtesy of the European Association of Folklore Festivals